You can find lots of photographs and detailed descriptions of all fashions from 1963 until 1979 on my original website (please use the navigation bar or buttons):

Skipper was smaller than Barbie and needed her own wardrobe. However, the first outfits created for her match some of the early Barbie outfits. Later on in the 60s, Mattel designed a wardrobe just for her. Like Barbies fashions, Skippers outfits were made in a very good quality with many details and came with lots of small items like flower bouquets, handbags, gloves, socks, caps, jumping ropes, yo-yos, birthday cakes and candles, etc. At that time, little girls were often dressed like small ladies, and the wardrobe available for Skipper represented this ideal.

The first outfits were called “Junior Fashions” and were sold on card in square packaging and included the clothing, accessories and a booklet. A small sticker attached to one side of the packaging stated the name and stock number of the fashion. They were made in Japan. 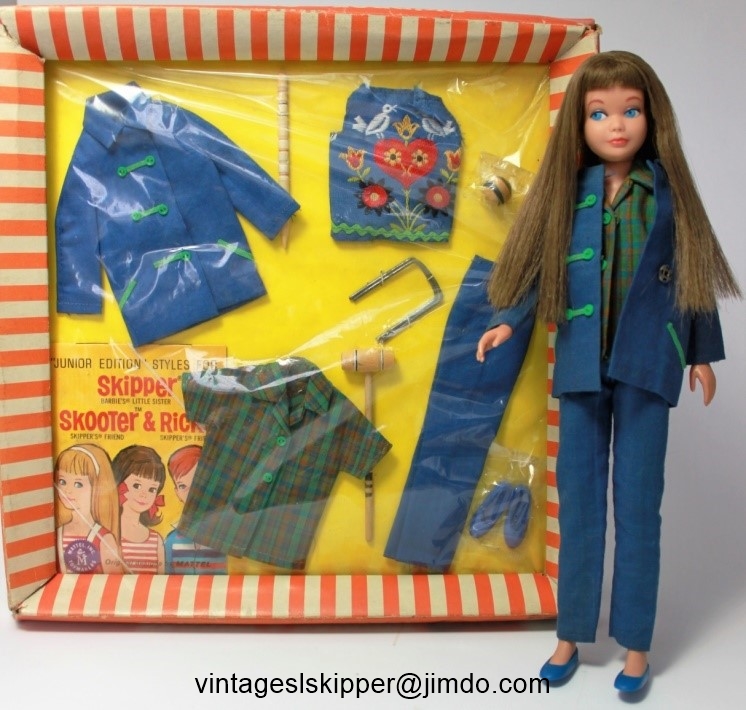 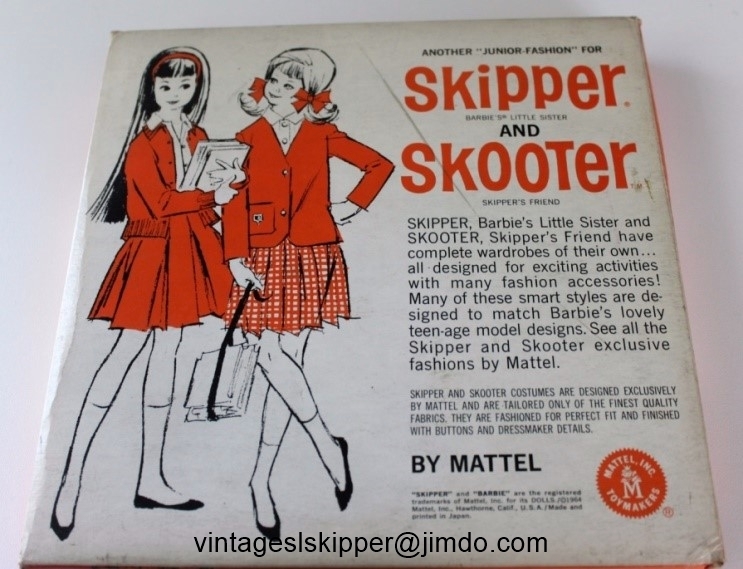 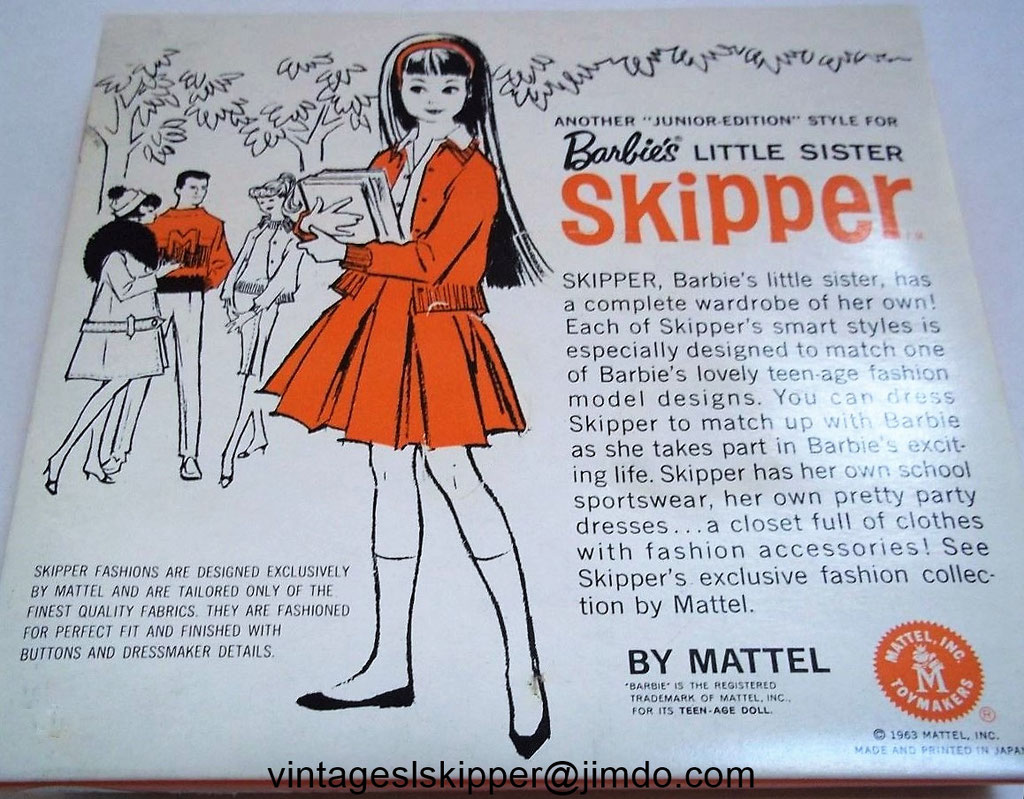 In 1965 and 1966, fashion trays for these outfits were used by dealers. In 1966, and maybe in 1967, roteable store displays made of metal which could hold three Skipper boxes were available in Europe. Usually, these items got thrown away after use, so they are almost impossible to find today. 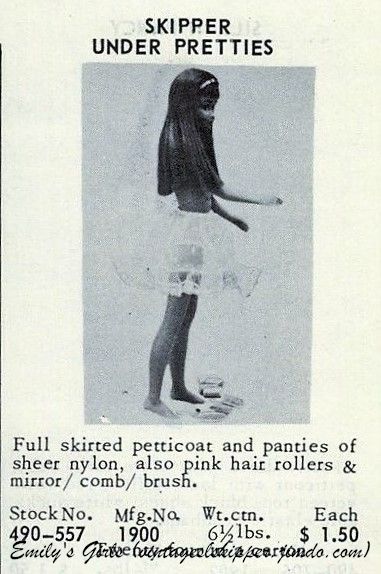 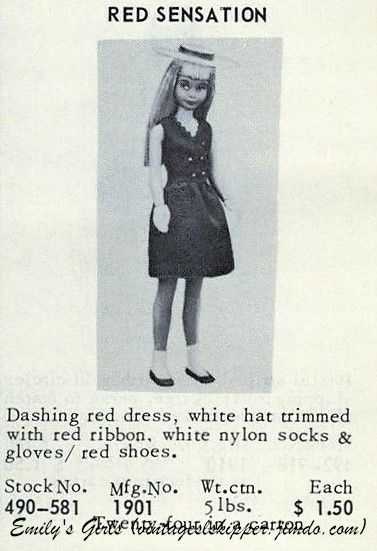 Usually, only one article of clothing in a set was tagged.

Skooter didn’t have her own tagged clothing, she shared Skipper’s fashions. There was one gift set  (Sears Exclusive Cut ‘n Buttons Gift Set) which contained an outfit especially for her, but these clothes had to be assembled and didn’t have tags. Of course they fit Skipper as well.

Ricky, however, did have his own tagged clothes. Six fashion sets for Ricky were sold between 1965 and 1967. In the German Barbie booklet of that time, Ricky and his fashions are pictured, but it is noted that Ricky and his outfits weren’t available in Germany.

In 1968 the first "Sears Exclusive" fashion for Skipper was available ("Confetti Cutie"). From 1970 until 1974 Sears sold its "Young Ideas" Skipper outfits, which were produced in many fabrics (often using fabrics from other Barbie & family fashions). There were also some Sears Exclusive fashions which were sold in gift sets, like the 1968 "Skipper Perfectly Pretty Set”.

Starting 1967, when the mod era began, Skipper’s wardrobe changed from outfits for little ladies or representing vintage values to colorful and trendy fashions. The first sets were made in Japan, later ones in Taiwan. 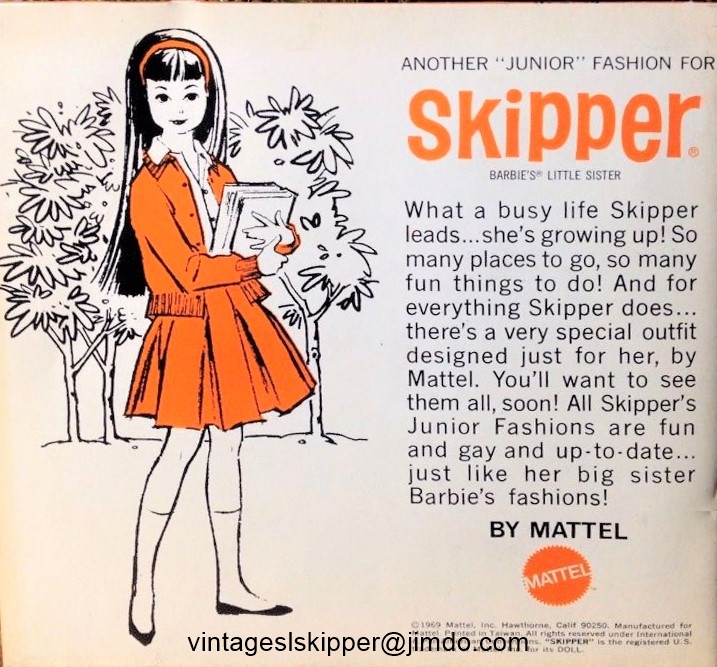 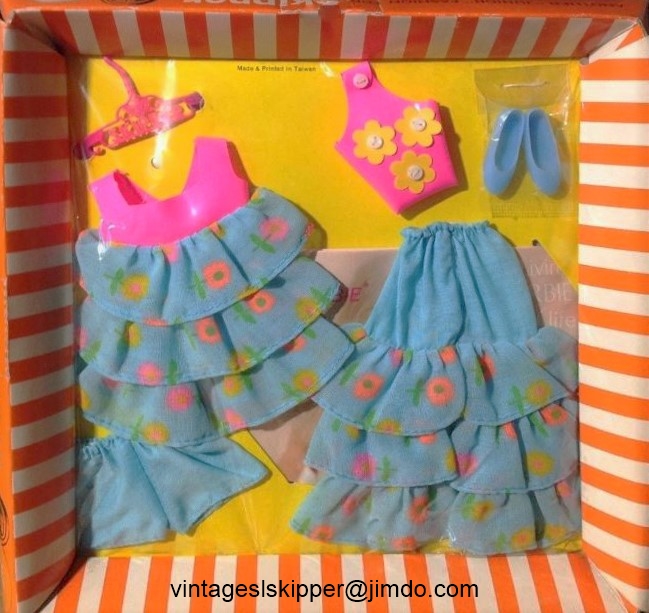 Sometime in 1968 and later, the back of some fashion boxes showed the same graphics like before, but the text was different. Now, the copyright information states: Contains articles made in Japan, Hong Kong or Taiwan ..."   (left pic: Drizzle Sizzle, right pic: Skimmy Stripes): 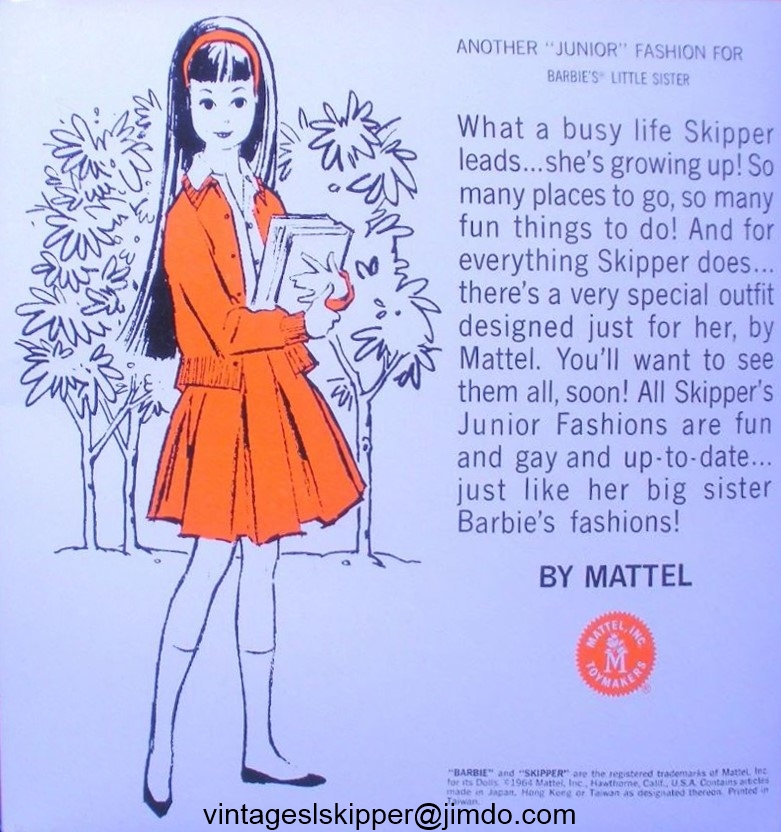 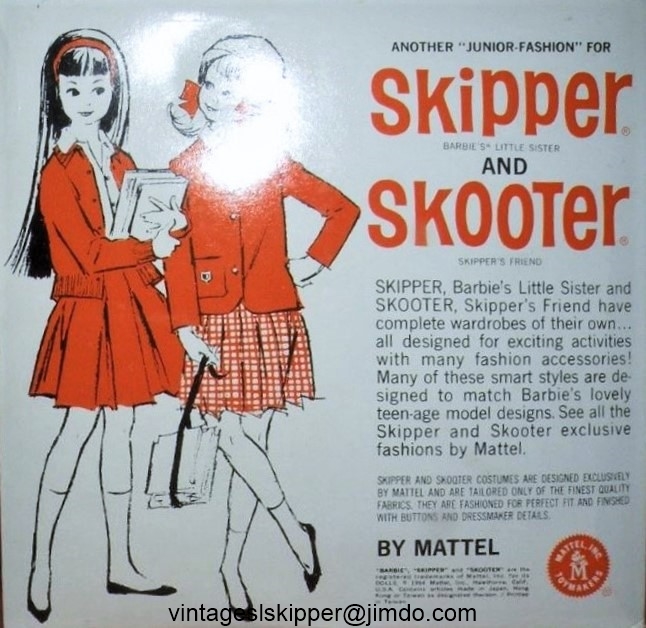 Additionally, smaller packages were available from 1965 until 1971, called “Pak Attack”. These often only included one piece of clothing, a few hats, or other accessories. “Junior Fashions” was also printed on them, but no stock number can be found on the cards. In the booklet, these Pak Attack items all had the same stock number: Fashion Pak #A1520 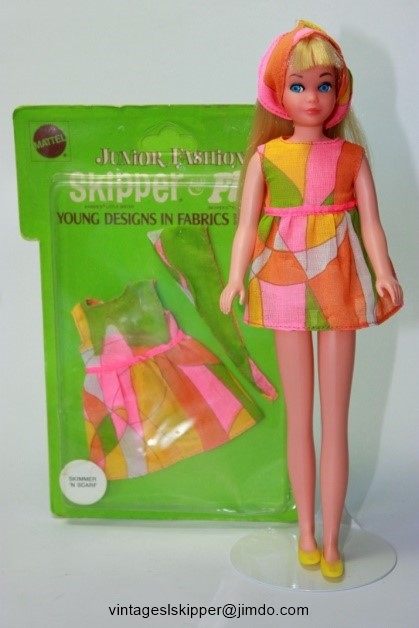 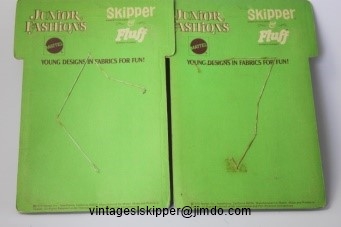 Starting 1972, Skipper’s outfits were sold on cards which had a plastic cover. Now, they were called “Fashion Originals”.

As of 1973, “Fashion Originals” were discontinued in the U.S.A. and only available in Europe.

Unlike the “Junior Fashions” before, “Best Buy Fashions”, especially the ones sold starting 1973, didn’t come with many accessories and the fabrics used sometimes were of a minor quality.

With the exception of Best Buy Fashions #3373 and #3374 (released 1972) which were produced in Korea but contained flats made in Japan, they were sold without shoes.

Nowadays, it’s hard to find a mint outfit of that era. Many of the “Best Buy Fashions” only consist of one or two items.

In the U.S.A., “Best Buy Fashions” only had stock numbers. But in Germany, and maybe other European countries, they still were given names. For example, Best Buy Fashion #8612 was called “Gute Nacht”, which means “Good Night”. German Barbie  booklets are extremely rare, but it was possible to find some.

Starting 1973, “Best Buy Fashions”, and “Get-Ups ‘n Go” fashions were available. These sets consisted of several clothing outfits and accessories – just like the “Junior Fashions” of the 60s.

Some or all of the “Get-Ups ‘n Go” fashions were made in Korea and were sold in Germany and maybe other European countries as “Fashion Originals”.

At least one of the “Get-Ups ‘n Go” fashions (#9747 – Red set for when it’s wet – released in the U.S.A. in 1977) was sold as a “Fashion Original” set in Germany (and maybe other European countries) a lot earlier - maybe already starting 1972 (packaging dated 1971). European “Fashion Originals” are extremely rare.

With the introduction of “Growing Up Skipper”, “Growing Up Fashions” were released in 1975. They could also be worn by “Growing Up Ginger”.

These fashion sets usually contained two sets of clothes (one for the little girl, and one for the “grown up” doll) and a few accessories, but they didn’t come with shoes .

In Germany (and maybe some other European countries) these fashions were given names (for example: #9021 = Blau/weiß/rot which means “Blue/white/red”).

Many coordinating or matching fashions for Skipper and the Barbie  family and friends were sold in the middle of the 70s.

As of 1978, some extraordinarily pretty and well-made fashion sets for Skipper were sold in Europe only as “Fashion Originals”. These are extremely rare.

The shoes were unmarked, just like the ones that came with the “Get-Ups ‘n Go” fashions starting 1977.

“Fashion Originals” were designed by Charlotte Johnson, who was the very first Barbie doll fashion designer in the late 1950s. Her goal was to always keep up with the current fashion trends. Charlotte was director of the Barbie fashion line until 1980.

Whereas some of the “Fashion Collectibles” which were introduced in 1979, resemble the “Best Buy Fashion”, others are wary well-made sets containing accessories.

The shoes included didn't have markings on their soles.

Also in 1979, Mattel released its “Fashion Favorites”. These fashion sets consist of several articles of clothing and adorable accessories.

They also came with shoes without markings on their soles.

All of the 1979 fashion sets are vhtf or even rare.

Prototype clothes were hand sewn. There was only one prototype of each garment. Most likely some sample outfits were produced after these prototypes using different fabrics and sewing patterns. These sample clothes are also unique, but no prototypes.

Proper documentation is needed to identify prototype and sample fashions. You’ll probably never find one of these articles for sale, but if you’re very lucky you might run over a production sample one day.

It is assumed that, after choosing one or two samples for possible mass production, a few production samples were made which were packaged in the original packaging.

Production samples are very rare. Some of them do have Skipper tags (only one clothing item of a set is tagged). You can get an idea of possible production samples by looking at the original booklets. In one of these, for example, “Turn Abouts” is pictured in a fabric very diverse from the mass produced fashion. Another booklet shows the dress from “Trim Twosome” in different colors and with larger stripes than on the known fashion.

The blue coat pictured is either a production sample or a very, very rare (European?) variation of "Pink Princess"

Here you can see a Test Market doll with the regular, blue version of "Ship Ahoy" and a red variation which is most likely a sample fashion.

Using up left-over fabrics or substitution of fabrics that weren’t available any more are two of the reasons why we can find lots of variations of Skipper clothing items. Some variations are very rare and might be taken for production samples.

But, production samples usually (but not necessarily always) were made of colors and fabrics that do not match with the mass produced fashion. Sometimes it’s impossible to tell exactly if an article of clothing is a production sample or an extremely rare variation.

Sometimes only small parts of the fashions vary. In this case the borders. The "Party Pair" dress pictured to the right is the regular dress, the left one is the dress with the rare border variation.

Mattel didn’t always produce all the fashions or items pictured on the booklets or on the original boxes. For example, the booklets show Skipper’s fashion “Real Sporty” with a hot pink cowboy hat. In fact, the set came without hat. The rare green Bendable Legs Skipper box shows a red dress with eight white buttons and white stripes. This fashion was never produced. The reasons for not launching these items on the market are not known.

You can find lots of photographs and detailed descriptions of all fashions from 1963 until 1979 on my original website (please use the navigation bar or buttons):